Right now Latent Semantic Analysis is the analytical tool I’m finding most useful. By measuring the strength of association between words or groups of words, LSA allows a literary historian to map themes, discourses, and varieties of diction in a given period.

This approach, more than any other I’ve tried, turns up leads that are useful for me as a literary scholar. But when I talk to other people in digital humanities, I rarely hear enthusiasm for it. Why doesn’t LSA get more love? I see three reasons:

1. The word “semantic” is a false lead: it points away from the part of this technique that would actually interest us. It’s true that Latent Semantic Analysis is based on the observation that a word’s distribution across a collection of documents works remarkably well as a first approximation of its meaning. A program running LSA can identify English synonyms on the TOEFL as well as the average student applying to college from a non-English-speaking country. [1]

But for a literary historian, the value of this technique does not depend on its claim to identify synonyms and antonyms. We may actually be more interested in contingent associations (e.g., “sensibility” — “rousseau” in the list on the left) than we are in the core “meaning” of a word.

I’ll return in a moment to this point. It has important implications, because it means that we want LSA to do something slightly different than linguists and information scientists have designed it to do. The “flaws” they have tried to iron out of the technique may not always be flaws for our purposes.

2. People who do topic-modeling may feel that they should use more-recently-developed Bayesian methods, which are supposed to be superior on theoretical grounds. I’m acknowledging this point just to set it aside; I’ve mused out loud about it once already, and I don’t want to do more musing until I have rigorously compared the two methods. I will say that from the perspective of someone just getting started, LSA is easier to implement than Bayesian topic modeling: it runs faster and scales up more easily.

3. The LSA algorithm provided by an off-the-shelf package is not necessarily the best algorithm for a literary historian. At bottom, that’s why I’m writing this post: humanists who want to use LSA are going to need guidance from people in their own discipline. Computer scientists do acknowledge that LSA requires “tuning, which is viewed as a kind of art.” [2] But they also offer advice about “best practices,” and some of those best practices are defined by disciplinary goals that humanists don’t share.

For instance, the power of LSA is often said to come from “reducing the dimensionality of the matrix.” The matrix in question is a term-document matrix — documents are listed along one side of the matrix, and terms along the other, and each cell of the matrix (tfi,j) records the number of times term i appears in document j, modified by a weighting algorithm described at the end of this post. 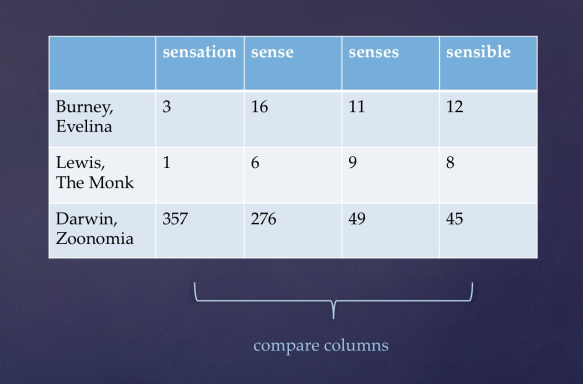 That term-document matrix in and of itself can tell you a lot about the associations between words; all you have to do is measure the similarity between the vectors (columns of numbers) associated with each term. But associations of this kind won’t always reveal synonyms. For instance, “gas” and “petrol” might seem unrelated, because they substitute for each other in different sociolects and are rarely found together. To address that problem, you can condense the matrix by factorizing it with a technique called singular value decomposition (SVD). I’m not going to get into the math here, but the key is that condensing the matrix partially fuses related rows and columns — and as a result, the compressed matrix is able to measure transitive kinds of association. The words “gas” and “petrol” may rarely appear together. But they both appear with the same kinds of other words. So when dimensionality reduction “merges” the rows representing similar documents, “gas” and “petrol” will end up being strongly represented in the same merged rows. A compressed matrix is better at identifying synonyms, and for that reason at information retrieval. So there is a lot of consensus among linguists and information scientists that reducing the number of dimensions in the matrix is a good idea.

But literary historians approach this technique with a different set of goals. We care a lot about differences of sociolect and register, and may even be more interested in those sources of “noise” than we are in purely semantic relations. “Towering,” for instance, is semantically related to “high.” But I could look that up in a dictionary; I don’t need a computer program to tell me that! I might be more interested to discover that “towering” belongs to a particular subset of poetic diction in the eighteenth century. And that is precisely the kind of accident of distribution that dimensionality-reduction is designed to filter out. For that reason, I don’t think literary applications of LSA are always going to profit from the dimensionality-reduction step that other disciplines recommend.

For about eight months now, I’ve been using a version of LSA without dimensionality reduction. It mines associations simply by comparing the cosine-similarity of term vectors in a term-document matrix (weighted in a special way to address differences of document size). But I wanted to get a bit more clarity about the stakes of that choice, so recently I’ve been comparing it to a version of LSA that does use SVD to compress the matrix.

Here’s a quick look at the results. (I’m using 2,193 18c volumes, mostly produced by TCP-ECCO; volumes that run longer than 100,000 words get broken into chunks that can range from 50k-100k words.) In many cases, the differences between LSA with and without compression are not very great. In the case of “delicacy,” for instance, both algorithms indicate that “delicate” has the strongest association. “Politeness” and “tenderness” are also very high on both lists. But compare the second row. The algorithm with compression produces “sensibility” — a close synonym. On the left-hand side, we have “woman.” This is not a synonym for “delicacy,” and if a linguist or computer scientist were evaluating these algorithms, it would probably be rejected as a mistake. But from a literary-historical point of view, it’s no mistake: the association between “delicacy” and femininity is possibly the most interesting fact about the word. 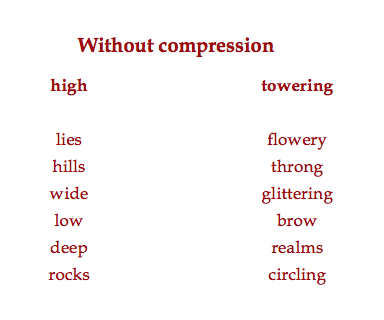 The 18c associations of "high" and "towering," in an uncompressed term-document matrix.

In short, compressing the matrix with SVD highlights semantic relationships at the cost of slightly blurring other kinds of association. In the case of “delicacy,” the effect is fairly subtle, but in other cases the difference between the two approaches is substantial. For instance, if you measure the similarity of term vectors in a matrix without compression, “high” and “towering” look entirely different. The main thing you discover about “high” is that it’s used for physical descriptions of landscape (“lies,” “hills”), and the main thing you discover about “towering” is that it’s used in poetic contexts (“flowery,” “glittering”).

The 18c. associations of "high" and "towering," as measured in a term-document matrix that has undergone SVD compression.

In a matrix that has undergone dimensionality reduction with SVD, associations have a much more semantic character, although they are still colored by other dimensions of context. Which of these two algorithms is more useful for humanistic purposes? I think the answer is going to depend on the goals being pursued in a given research project — if you’re interested in “topics” that are strictly semantic, you might want to use an algorithm that reduces dimensionality with SVD. If you’re interested in discourses, sociolects, genres, or types of diction, you might use LSA without dimensionality reduction.

My purpose here isn’t to choose between those approaches; it’s just to remind humanists that the algorithms we borrow from other disciplines are often going to need to be customized for our own disciplinary purposes. Information scientists have designed topic-modeling algorithms that produce semantically unified topics, because semantic categorization is important for them. But in literary history, we also care about other dimensions of language, and we don’t have to judge topic-modeling algorithms by strictly semantic criteria. How should we judge them? It will probably take decades for us to answer that question fully, but the short answer is just — by how well, in practice, they help us locate critically and historically interesting patterns.

A couple of technical notes: A fine point of LSA that can matter a great deal is how you weight the individual cells in the term-document matrix. For the normal LSA algorithm that uses dimensionality reduction, the consensus is that “log-entropy weighting” works well. You take the log of each frequency, and multiply the whole term vector by the entropy of the vector. I have found that this also works well for humanistic purposes.

For LSA without dimensionality reduction, I would recommend weighting cells by subtracting the expected frequency from the observed frequency. This formula “evens the playing field” between common and uncommon words — and it does so, vitally, in a way that gives a word’s absence from a long document more weight than its absence from a short one. (Much of LSA’s power actually comes from learning where a given word tends not to appear. [3]) I have tried various ways of applying log-entropy weighting without compressing the matrix, and I do not recommend it. Those two techniques belong together.

For reasons that remain somewhat mysterious (although the phenomenon itself is widely discussed), dimensionality reduction seems to work best when the number of dimensions retained is in the range of 250-350. Intuitively, it would seem possible to strike a sort of compromise between LSA methods that do and don’t compress the matrix by reducing dimensionality less drastically (perhaps only, say, cutting it by half). But in practice I find that doesn’t work very well; I suspect compression has to reach a certain threshold before the noise inherent in the process starts to cancel itself out and give way to a new sort of order.